My main love is writing music and words for the theatre, and you can find out more about this work on the Three Chairs and a Hat page.

I’ve also worked in collaboration with other writers/composers, and have taken  commissions for a variety of projects. Here are a few examples:

Love Online is a romantic comedy written with Andy Milburn about two singles who live two doors apart but meet on the internet. It’s been staged by the Quince Players, the Starburst theatre company and Sainsbury’s Singers, and a selection of tracks recorded live at a pre-production showcase can be heard here. 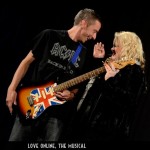 I composed the soundtrack for Philip Hind’s documentary The Ultimate Survivor, and a piece for the Lunas Dance Company, Time Was, Time Is, Time Will Be, which was performed at the Old Fire Station in Oxford (pictured below). 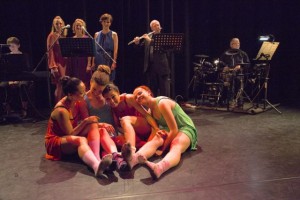 I also write and arrange music for soloists and ensembles and compose songs for special events and for theatre workshops, including Creation Theatre‘s Put on a Musical Play in a Week projects.